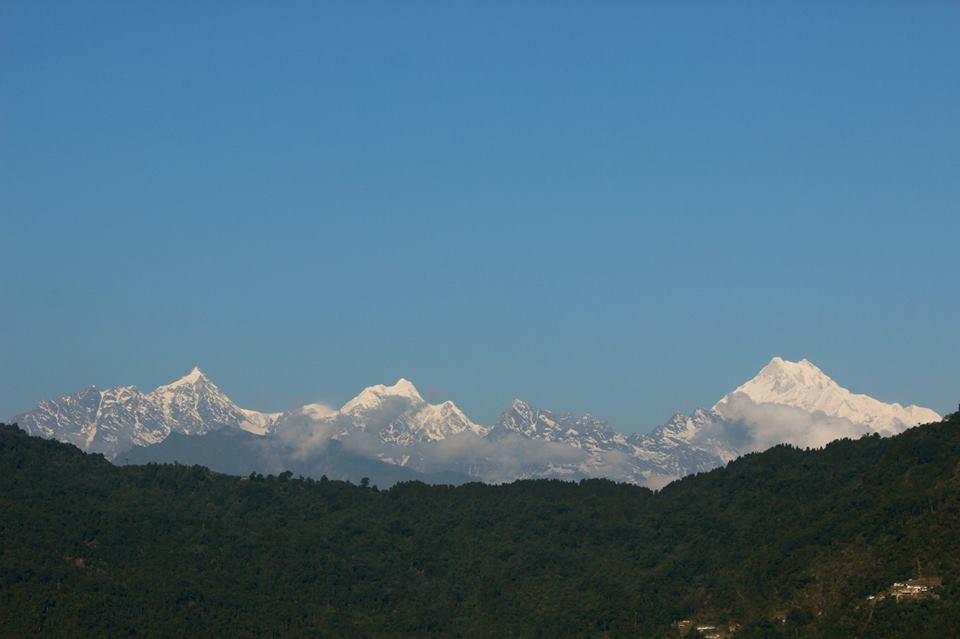 Suva padded quietly, barefoot to the old woman’s door. Kajol was on the bed, pressing a saturated handkerchief to a shrivelled brow. Low moans emanated from the old woman and Suva knew at once her grandmother must have been very unwell. She had never seen her like this. Her grandmother would never admit weakness, if she could help it.

Suva turned away, but heard her name called, croaked hoarsely from her grandmother’s room. She went back and this time entered the room fully.

It felt like walking into another realm. Although the lights were on, it was still dim. Pinkish tones from the red lampshades and yellow light bulbs cast shadows as if they were in a cave in the underbelly of the earth. Perhaps they were in the belly of a whale. Suva’s mind wandered for some time until she noticed the smell of mothballs. She had never been in her grandmother’s room. It was the only room in the flat which was out of bounds and Suva did not mind. It felt like the witch’s house which was always forbidden in fairy tales.

Suva perched on the side of the bed, where her grandmother patted softly, indicating Suva’s place.

“I need to tell you a story. I could not tell you this morning. You had to go to school.”

“But you are unwell, Dida. I need to complete my homework. You can tell me tomorrow.”

The old woman shook her head, “I will not be here tomorrow. They told me, I have to leave tonight.”

Kajol Didi got up to leave. Quietly spoken and ever patient, the maid sensed the old woman wanted to be left alone with her granddaughter.

“You like stories. Your mother told me. I remember when you were very small, just a baby, how you would gobble up my stories with your large eyes, following my mouth to catch every word. You understood everything! You would laugh at the funny parts and your eyes would well up when I told you of something sad. Yes, you love stories!

Now listen, this is a true story.”

Suva relented. On the side of her grandmother’s bed, wafts of napthalin and Iodine filled her head. An uncomfortable familiarity filled Suva’s arms and legs and made them heavy. It was as if she couldn’t move even if she wanted to. She allowed herself to be pulled up and into the covers next to her grandmother. Her grandmother’s body held a different kind of warmth. It gave the impression of meat and bones, being kept warm by something other than life.

From far away, a voice caught Suva’s mind and skilfully knotted it to a line of thread.

“We lived in house, which stood on stilts, like all the houses in the village. Under the house, the snakes hid and stray kittens and puppies played. Sometimes, I would crawl underneath and watch and feed the animals, but never the snakes. The snakes would slither away when they saw me. They were not the dangerous kinds, not cobras or pythons. They would not harm me…small and thin like worms, they were.

Every day, I would return home and from school and sit and watch. Sometimes, Mother would allow me to feed the animals and they would crawl into my lap, covering me with the dirt from their paws. My brothers were away and I was at peace.

One day, I saw a dog, pregnant and full, crawl under our house. She would give birth that night, we all knew from experience and maybe one or two of the pups would not survive. This too we knew.

She was covered in fleas and her ribcage was visible. Her fur was dirty and red sores, raw and bleeding could be seen all over her body. Her teats hung low and she was exhausted. I gave her some food but she could not lift her head to touch it. When she arrived under our house she fell and closed her eyes. She was not dead, she was just tired.

In the night, we heard her howling. I crept out of the bed I shared with my mother and made my way outside. There was a half moon, perfectly cut. Its sharp corners and the cold stars pricked my skin and made me shiver.

There was just enough light to make out that there were two puppies which had already been born and a third was on its way. I dared not touch it. I could just imagine the sticky mucus and blood, which I could make out with the sheen on the pups, when they happened to catch a stray bit of light.

The third pup finally came but something was wrong. The mother, even more exhausted than when we saw her last could not bring herself to lick this one to life. It lay still, unmoving, while the other two writhed and wormed blindly, to make their way to the sagging teats of their now sleeping mother.

I ran inside and found a rag and I tried to free the third from its birth sac. Gently, as gently as I could, I rubbed it free. Eyes closed, it looked as if it was sleeping. It was not moving, although I was sure it was still alive. I rubbed it again, this time more vigorously and placed its mouth directly by its mother’s breast. Finally it moved and somehow managed to latch on.

Suddenly, as I watched the tug and pull of life slowly entering and nourishing this tiny life, I felt myself being dragged away. I had been discovered.

I received a beating of course but at dawn, I went out to see the pups again. The thought of the third little one kept me awake.

I tip-toed past my sleeping mother and crept out of the door. The sky was grey. Birds chirped and chirruped happily and people were emerging. My mother woke later than the other residents and I hoped to be inside before she opened her eyes and noticed me gone a second time.

As quietly as I could manage, I made my way to the underside of our house.

I gasped at what I saw. The mother had gone with two of her pups. The last pup had been abandoned. In the dark, last night I had not noticed that the pup I had saved was deformed. The back legs bent strangely, like a frog and the body was awkwardly much shorter in length than one would have expected. Eyes still closed, it lay on its side, still breathing but soon to die.

I ran inside and woke Mother. It was only the two of us, you know, after my brothers ran away. She came out reluctantly, covered from head to toe in a shawl. She felt the cold and hated the mornings.

She saw the little pup and looked at me. It seemed like a long time before she moved. Without a word, eventually, she bundled up the little one and took him inside.

The milk which had been saved for me was watered down. Mother soaked a rag in the thin white mixture and cradled the little pup like a baby. She held the rag close to pup’s mouth until the little one sucked and sucked.

“Get ready for school,” she said. “I will take care of him.”

From that day on, Frog was ours. That is what we called him. Because of his deformity, he would almost hop like a frog to get about. He ate well and grew to the perfect size, not to big and not too small. His fur was brown and orange and his face was ugly but funny and compleletely loveable. With a squashed nose and big eyes, he resembled a pug.

One day, a year or so later, as Frog huddled close to me in the evening. I noticed a light in the doorway. Mother was stitching something by the lamplight. She was engrossed.

It looked as if we had a visitor. In those days, our village was not lit with street lights. When the sun went down, hurricane lamps lit our homes and outisde was as black as pitch. People carried lamps when they ventured out after dark. Most did not venture out after dark.

I stepped down off from the bed and walked to the door. Frog followed and waited patiently to see what would happen next.

His tongue lolled open and his eyes, which looked in two different directions at once, sparkled. He sniffed and wiggled but he sat and waited. Such a good boy!

The stranger waited for me, wordlessly. Her hood covered most of her face but she smelled of flowers.

“I have come for Frog,” she said with a voice like honey.

“But he is ours,” I stammered. The thought of giving up the one thing I clung to, was too heartbreaking to allow, and yet I knew.

Frog looked at me and waited for my command. I had no words, I think he saw it in my eyes. He let out a tiny bark as if to tell me that it would be fine, it was all for the best, but how could I let him go? And all this time, my mother sewed and saw nothing.

“He is mine, child. But he will return at another time, I promise you. He will come when you need him the most.”

I nodded and then looked down to try and avoid looking at the woman or Frog with tears in my eyes. But I felt the tears leave my eyes and I heard them fall heavily on the earthen floor and I could not stop them. Immediately they turned to pearls. I let them be and finally looked up.

The woman then removed her hood and a bright light filled the room. Mother still did not stir and I could only gaze on in a kind of stupor.

The stranger’s skin was as white as milk and on her head appeared a golden crown. On her forehead, just beneath her crown she had seven eyes, all blinking and seeing at different times.

Frog too, changed. He grew and stood on two legs. His fangs became long and sharp and they protruded from a red mouth. He too wore a golden crown. His was encrusted with jewels and garlanded with severed heads. He was truly terrifying to look upon, and yet he was still my Frog with the squint eyes and lolling tongue. In his right hand he held a sword and his left hand held a noose against his chest. Clad in tiger skin, I wondered if he would growl now. As a dog he never did, not even at strangers but this was a new guise and although I was not afraid for myself, I was afraid for anyone else who might chance upon him.

I fell to my knees and clutched myself in pain and awe.

“We are gods, little one. We have work to do. We will protect you always, do not fear but for now we must leave this world. You will understand one day, but not today.”

And with that they left.

On the floor, I saw the pearls from my tears. I gathered them up and hid them in a case. I have them still. These will be yours. Give them to Kajol to get them strung into a bracelet.

“Are you really going to die, Dida?”

“Yes, my Suva, it is time. Frog came back to me last night and told me. I am not afraid, but I needed to tell you the story, I needed to give you the pearls. Now go, leave me. In the morning, I will have passed. If you happen to see a light in my room, as bright day, do not look inside, I fear you are too timid to bear the sight.”