A whole other thing! 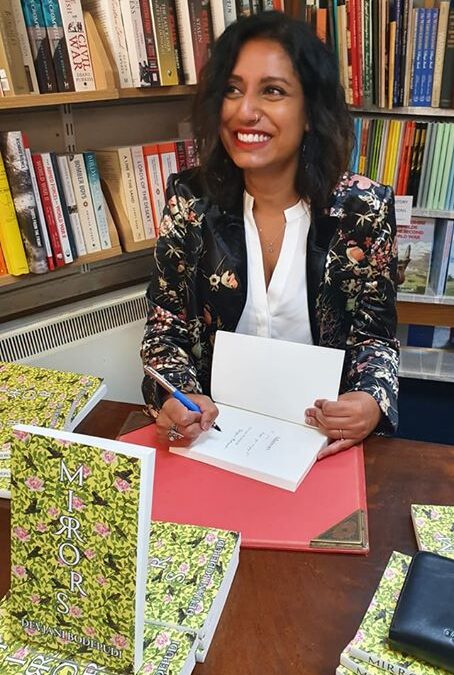 So much has happened since my last proper blog post. It’s been a whirlwind of activity and now I am left exhausted but happy.

The big news is that my book MIRRORS, published by Holland House Books is finally out! The print edition came out in January and the launch was on the 25th. I was overwhelmed by the support of friends and family who came and since then I’ve been signing copies as if in a dream.

If you’d like to buy a copy you can from Amazon and from Waterstones online. I would also welcome reviewers so if that’s something you’re interested in, please get in touch.

If you’ve already read it, can I please ask….please….could you write a review, either for Amazon, if that’s where you bought it (e-book or print) or on Goodreads (you can have bought the book from anywhere but you’ll need to register on Goodreads.) Personally, I love Goodreads as I get so many great recommendations and I’m able to keep a track of all the books I’ve read. Alternatively you can leave a short review in the comments section and I can pass them on. My publisher did say that reviews were like gold dust!

Things have slowed down now though and I am grateful that I have the space and time to resume writing again, I just wish I could get my brain back into gear.

Today, I visited my parents to help with an email that needed sending and I was shown an old photograph from my son’s first birthday party. It was taken only about seven years ago but with my grandmother’s old camera, the kind that needs film. The angle wasn’t quite right, and the composition was pretty awful, but there was movement in it. My daughter’s expression was priceless, and my son looked like he was going to climb right out of my arms. Like I said, it was not the perfect shot, but then, it really was. The image was a surprise. It captured the moment, the chaos and the joy wonderfully. That spontaneity is something that is very rarely captured today. I’ve always hated people taking pictures of me when I’m not ready. I always felt I didn’t look right in them, but now, I don’t mind. Now, it’s more about the moment and feelings. It’s not really about my face-although I am devastated when I can see the dark circles and the roots of grey-but it really is about who else was there, including the people who took the picture. (Thanks to Mrs Talbot for today’s featured image-one of favourites of the day!)

My grandmother always had her camera handy. These days, not so much. It hid in a special pocket in her handbag and she would always produce it for someone to capture an image. A few days later, when the roll was full, she would send someone to the chemist to get the film developed and sometimes we would see the results. Most of the time, though she would keep the images to herself or show them off only when she was in India to relatives we would never meet. The photograph found its way back to us completely by accident and I am grateful for it. My daughter never smiles like that in front of the camera now. And her smiles for the camera, at the time the picture were taken, were forced, strange and not necessarily reflective of the joy she may have felt either side of the moment of the shutter click. We’ve got tons of picture from that day, but I think I that one one the best.